The unincorporated village known as Hobe Sound is located adjacent to Jupiter Island in southern Martin County. Hobe Sound’s roots date back to the late 1600’s when a British merchant ship known as the Reformation, on its way from Jamaica to Philadelphia, sank off the coast just north of the Jupiter Inlet. The 25 souls forced ashore left behind a cargo of sugar, rum, beef, molasses, and Spanish currency. After being forced ashore, Captain Jonathan Dickinson and crew encountered two local Indian tribes. The influence of those two tribes can be seen today in the naming of two towns. Our own Hobe Sound(Jove/Jobe Indians), and Tequesta (Tekestas Indians) to the south. According to the Florida WPA Guide, Hobe Sound received its name by 1699.

Hobe Sound’s roots lie in the GOMEZ GRANT. This was a Spanish land grant of 12,000 acres including the entire Jupiter Island and an 8000 acre block on the mainland (which encompasses almost all of Hobe Sound). The land was given by Spain to Don Eusebio Gomez in 1815 for “services to crown”. Gomez was known as a merchant/shipper and defender of St. Augustine. In 1821, When Florida became a US Territory, all the Spanish Land Grants were challenged by US Government. Many land grants were assumed to be “dumping” of tracts of land to Spanish citizens who had not met the accepted grant conditions at that time, but were being allowed to keep land that should belong to US. The Gomez Grant was challenged all the way to the US Supreme Court before Gomez finally won clear titleclose to 20 years later. The end result was no land development occurred. Don Eusebio Gomez, later sold land from the grantfor $1 an acre to Joseph Delespine. This sale included Jupiter Island.

The heirs (and some who claimed to own parts of the grant) all relinquished claims to the Gomez Grant to the Indian River Pineapple and Cocoanut Growers Association (IRPCGA) in the 1880’s. This was the first group to actually try to develop the tract. Jupiter Island was minimally successful with only a handful of sales from a cocoanut plantation, but pineapples were more successful on the mainland. Within a few years, 50 individuals would claim and have pineapple plots in Hobe Sound.

1894 brought Henry Flagler’s railroad thru our area. A group of English investors known as the Indian River Association (IRA) believed that the railroad meant the beginning of a Florida land boom, and bought all unsold portions of the Gomez Grant from the IRPCGA. The IRA builtadvanced infrastructure well beyond its years and did it mostly before selling the property off to others. They built a water plant, an electric plant, and also the first Hobe Sound Bridge. They also dredged a ferry landing in Hobe Sound near Gleason Street which was used until the bridge to Jupiter Island was completed.

During the land boom of the 1920’s, Hobe Sound was renamed Picture City by the Olympia Improvement Corporation with plans for the area to become a new Hollywood. However, in 1928, after a devastating hurricane, the name was restored to Hobe Sound. Along with street names, some lampposts still remain today. When Olympia collapsed, Mrs. Anthony Biddle foreclosed on the holdings and acquired all the unsold assets. Hobe Sound languished like the rest of Florida through The Great Depression. In 1933, Mrs. Biddle sold her Olympia holdings to a new group called The Hobe Sound Company. William Barstow and Joseph V. Reed were part of this group. Within about 4 years, J.V. Reed bought out virtually all the stockholders and assumed control of the HSC. For the next 65 years, the Reed family managed The Hobe Sound Company and its three primary assets – the original water company, Jupiter Island Club, and the remaining unsold Gomez Grant real estate including land in what is now Hobe Sound.

An important event in Hobe Sound’s history was the development of Camp Murphy. It was developed as a training facility for the US Army Signal Corps. The purpose of the base was to train men in how to repair and operate RADAR units. The base encompassed some 10,000 acres. The base only operated for about 2 years, but approximately 10,000 men passed throughits gates. The old Wilson Palm Garden shop on old Dixie in Hobe Sound was a USO, as was an oceanfront home on Jupiter Island. The base almost doubled the population of Martin County, so it became a significant economic engine. Several years after the war, the base was acquired by the state and became Jonathan Dickinson State Park. Most buildings were demolished with salvageable materials sold. Bridge Road is lined with former Camp Murphy buildings: Diamond’s garage building, the Perky Pelican, the Tackle Shop, the hairdresser’s shop across the street and a building next door, as well as the HS Community Center at Zeus Park and several homes in Zeus Park –all were moved from Camp Murphy. Only a single CM building of the 400+ built remains in JDSP today.

In Hobe Sound’s closer history it is nearly impossible to proceed forward on a timeline without the involvement of Jupiter Island. As Jupiter Island has developed, so has Hobe Sound. The Reed family has been active in development of Hobe Sound since the 1930s. Our area can attribute many of the areas we see and speak about that define Hobe Sound to the generosity of Jupiter Island and its residents. Some, but certainly not all of these include: The ficus trees on Bridge Road, land for Zeus Park and Hobe Sound Community Center along with its Oak trees,the development of Banner Lake and the community center there, access to the public beach on Bridge Road, formation of Blowing Rocks Preserve, and lastly the Hobe Sound National Wildlife Refuge at the north end of Jupiter Island.

*Special Thanks go out to Nathaniel Reed and his book A Different Vision, Frank Lund, and Skip Galdman for the information used in this section. 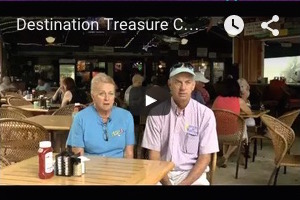